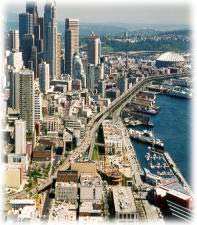 John Reilly provided high-level consulting to the Washington State Department of Transportation (WSDOT) from 2001-2013, including initial options for the replacement of the Alaskan Way Viaduct and Seawall along Seattle’s waterfront and implementation of the SR520 Floating Bridge replacement.  After the initial work in 2001, John was asked to provide Management and Technical Consulting services to WSDOT for Mega Project Management, Team-Alignment, Cost Estimate Validation, Risk Analysis and, the evaluation of new alignments and options for future Seattle Sound Transit Tunnels. The initial contract ran until the end of 2004, a second contract ran from 2005 thru 2013.

Alaskan Way Viaduct.  Because the viaduct was damaged in the Nisqually earthquake, replacement of the structure is urgent.  Services in 2001 included development of above ground and underground options considering integration of Urban Design for the city of Seattle. Presentations were made to the City, State Transportation Commission and the Seattle-WSDOT Leadership Advisory Group.  Subsequently, from 2002-2007 John  worked with WSDOT on organizational reviews and changes, engagement of the Project Management Assistant consultant and assistance to the 2006 Expert Panel.  From 2009-2011 he advised WSDOT regarding design and contracting for the large-bore tunnel.

The SR520 Floating Bridge needs replacement because it is nearly 50 years old and is vulnerable to earthquakes and wind storms. John’s services from 2007 include work with the Project Director regarding organization, team-alignment, strategic planning, technical input to engineering, CEVP cost-risk services, report on tunneling options under Montlake Cut and related advice to the WSDOT executive branch.

In May of 2012 after more-than-expected cracking of the replacement pontoons John was asked to form an Expert Panel to advise on the causes of the cracking and recommendations for modifications to the structures.  Recommendations were delivered in 2012-13 and were implemented by WSDOT.

Subsequently, the Secretary of Transportation asked John to report on internal agency decisions that had led to the cracking and unexpected costs.  That report was delivered in January 2013 and led to organizational changes within the agency.