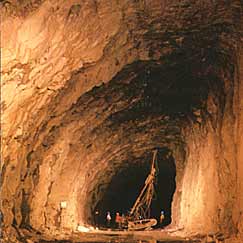 * Attendees at the North American Tunneling Conference in Boston in June.

The presentations focused on Public Policy, Teamwork and Risk Mitigation as strong determinants in the success of underground projects.

John also discussed the role of the Owner and addressed Procurement (Contracting) practices which often cause problems – specifically the low-bid fixed-price approach. Techniques to improve project delivery, including re-engineering, partnering and alliancing, were presented and discussed.

In addition to the presentations, more specific discussions were held with Owners, Engineers and Contractors about the contracting and management issues. The role of Professional Associations in communicating these issues to Owners has also been explored with AMITOS, ITA and AUCTA – the Australian Underground Construction and Tunneling Association.

Further discussions were held with Underground Associations in Austria (October) and Beijing (November).