The CEVP process was developed by John Reilly, working with the Washington State Department of Transportation (WSDOT) initially in 2002, with improvements to the process through 2013. It is registered to WSDOT to recognize their role in its development and implementation. 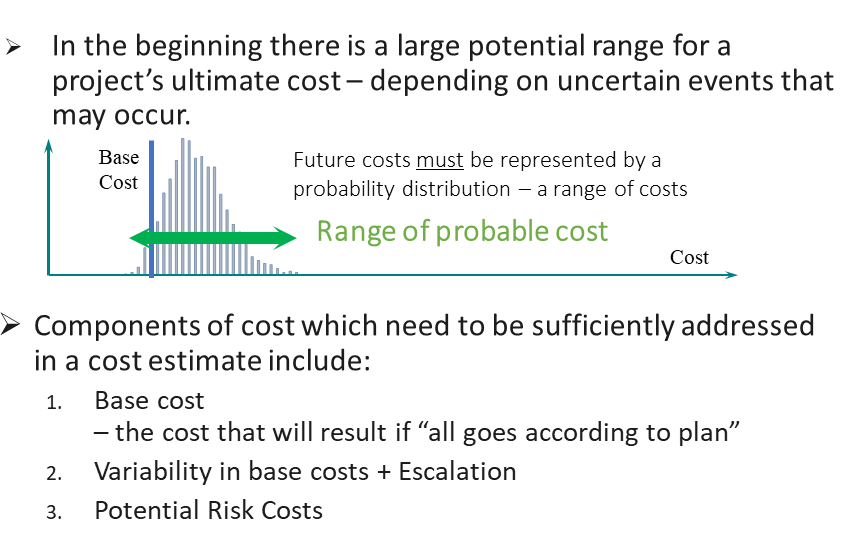 A key concept is that any value in the future is not a single number but a range – which can be dependent on many factors and variables.

The intent of the CEVP process is to determine an accurate estimate range for both cost and schedule – key risks must be identified, characterized and measured. Formerly, cost estimates accounted for risk based on the estimator’s experience and best judgment, without necessarily identifying and quantifying such risks—project uncertainties and risks were included in a general “contingency” that was applied to account for such uncertainties.

In CEVP, estimates are comprised of two components: the base cost component and the risk component. Base cost is defined as the planned cost of the project if everything materializes as planned and assumed—the base cost does not include contingency but does include the normal variability of prices, quantities and like units. Once the base cost is established, a list of risks is created and characterized, including both opportunities and threats, and listed in a Risk Register. This risk assessment replaces general and vaguely defined contingency with explicitly defined risk events and include the probability of occurrence plus impact on project cost and/or schedule for each event. The risk component is usually developed in a CEVP Cost Risk Workshop.

Estimating project costs and schedules and the likely range of possible outcomes is an important and crucial task for owners and project managers. See references at the end of this section.

CEVP has been recognized by the US Federal Highway Administration. It has been used in many US states and cities and for several international projects.

Definitions: Base Cost, Base Schedule and Risk

Base Cost represents the cost that can reasonably be expected if the project materializes as planned. Base cost typically has relatively small uncertainty or variance. Base cost is initially estimated by the Project Team, reviewed and validated by a “Cost Lead” before the workshop, then that validation is confirmed in the workshop by the CEVP Team with the Subject Matter Experts.

Base Schedule represents the schedule that can reasonably be expected if the project materializes as planned. Base schedule typically has relatively small uncertainty or variance. Base schedule is initially estimated by the Project Team and reviewed and validated by the Schedule Lead before the workshop, then that validation is confirmed in the workshop by the CEVP Team with the Subject Matter Experts.

When characterized, risk describes potential exposure to the consequences of uncertainty. In a project context, it is the probability of an event that, should it occur, will have an impact upon project objectives. It includes the possibility of loss or gain, or variation from desired or planned outcomes, as a consequence of uncertainty associated with following a particular course of action. Risk thus has two elements—the likelihood or probability of the event happening and the consequences or impacts if it does.

CEVP with Value Engineering and critical scope evaluation can optimize projects and also evaluate changes that are necessary to deliver the project within authorized budgets. The following example is from the Seattle Alaskan Way tunnel, where this process was used to define the specific project that could be delivered within the authorized budget – with a 60% probability of delivery at or below $1.96 billion. The tunnel could have been delivered at this probable number, but because of the occurrence of a very low probability / high impact event (which had been included in the risk register) the project went over budget. 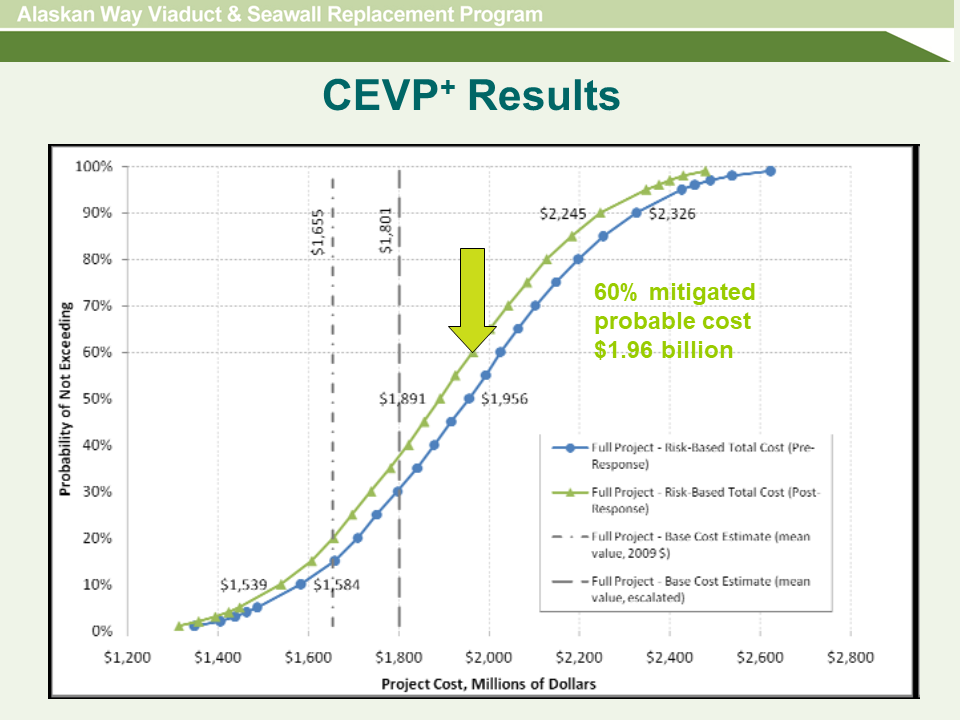 For a detailed description of how the Washington State Department of Transportation (WSDOT) developed CEVP to review and validate cost estimates for large, complex infrastructure projects as well as to address risk and opportunity, please download John’s paper using the following link:
CLICK HERE

RIAAT is an advanced cost and risk management software program that allows owners, contractors and designers to efficiently manage projects during their complete life cycle. RIAAT combines structured (hierarchical) cost and schedule input, cutting edge simulation and modeling capabilities, a clear project structure and ease of use. Following is a summary of the key elements of RIAAT. For more specific details, please refer to the RIAAT section of the RiskConsult website at http://riaat.riskcon.at. RIAAT Integrated Cost and Schedule Model 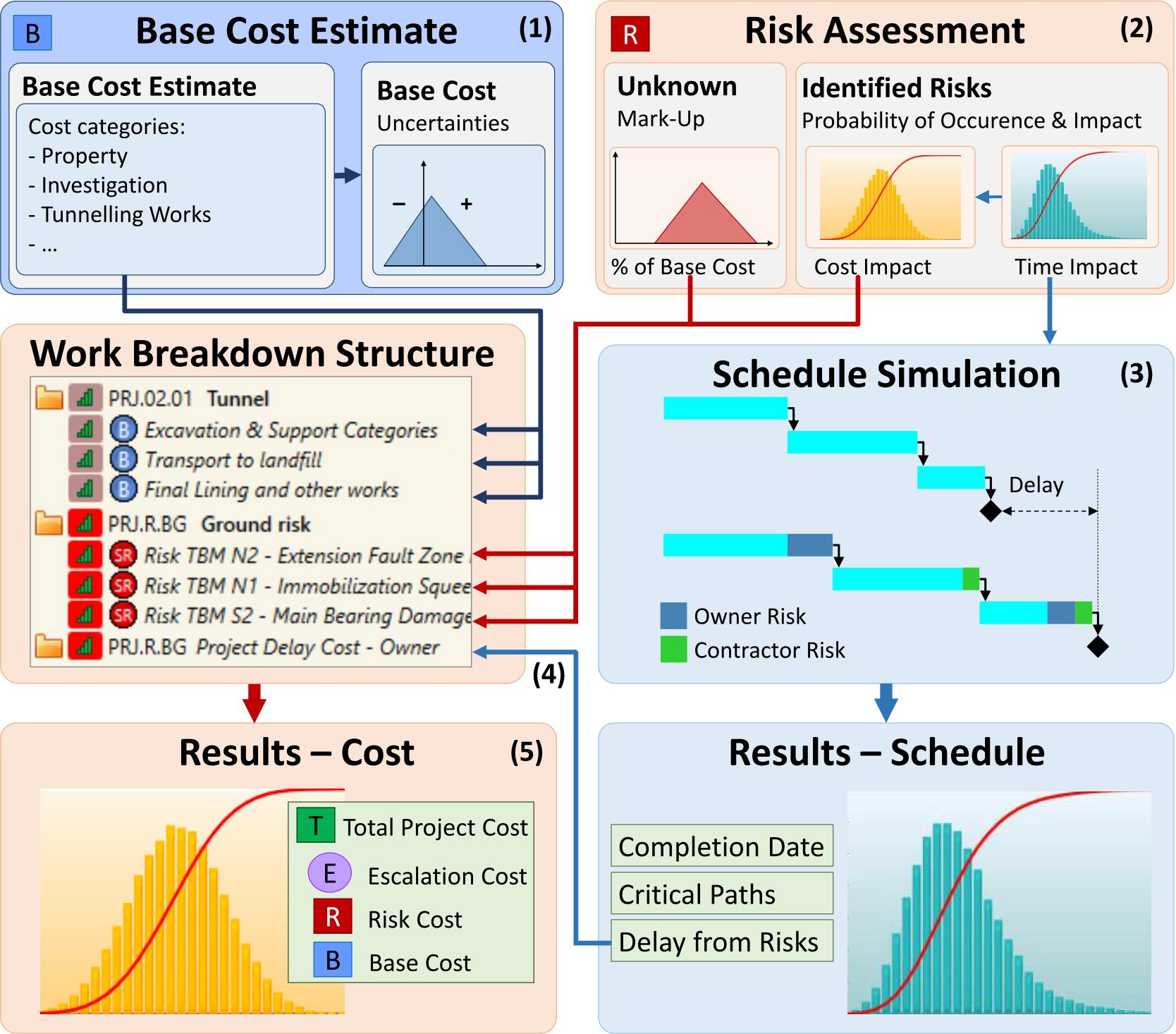 The program is fully integrated with cost, schedule and risk. Because of the probabilistic risk process, multiple critical paths can result, including a determination of who owns, or contributes to that critical path. Therefore the tool can be useful in project management and forensic analysis for claims and disputes.

An example of a critical path schedule with risk contributions to the critical paths owners is shown following. 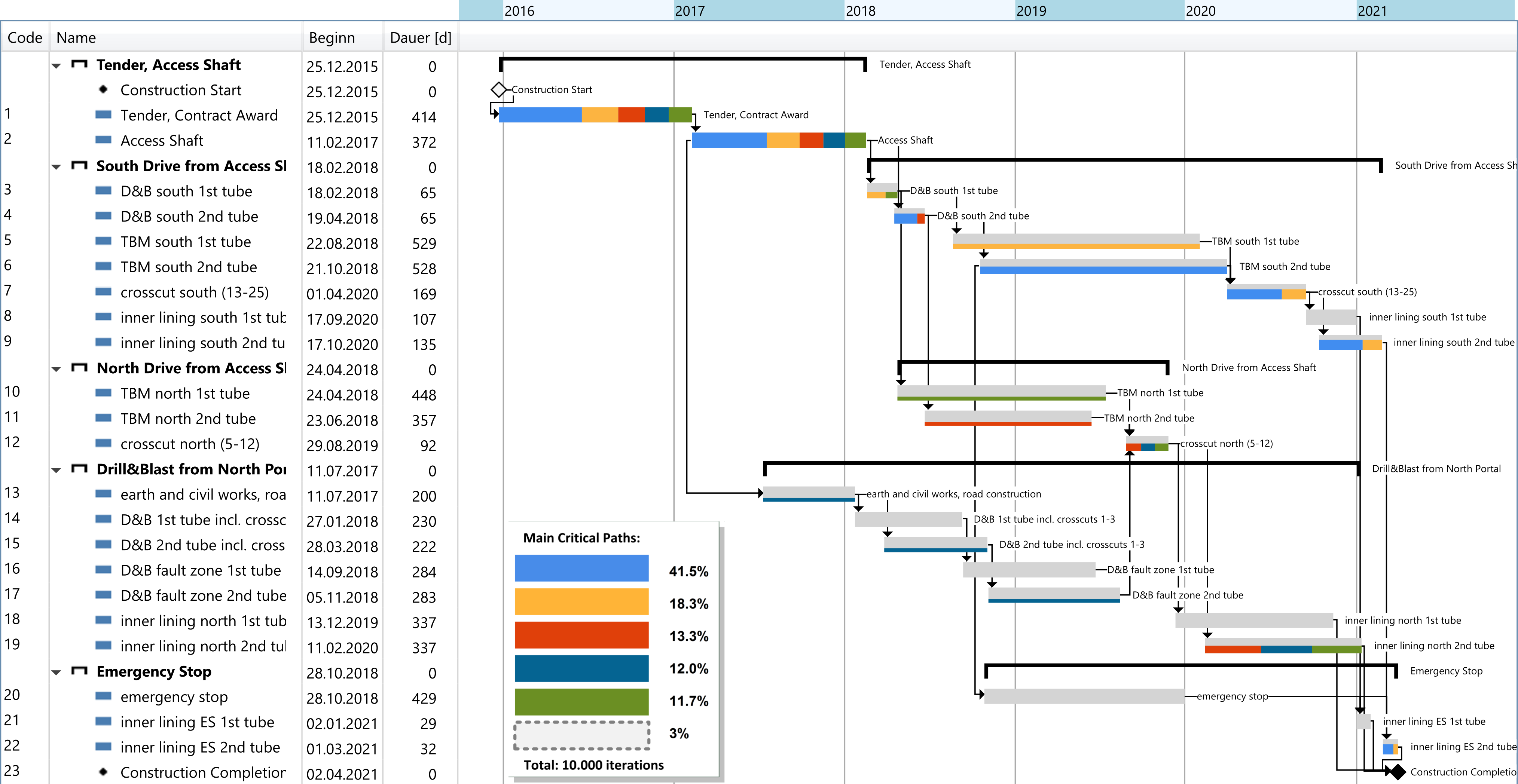 Reilly, J.J, 2013, Author of the Foreword, co-author of the Chapters on Risk and Cost + Schedule management in “Managing Gigaprojects,” ASCE press, Ed Galloway, Nielsen and Dignum

Talib, N.N. 2007, “The Black Swan: The Impact of the Highly Improbable,” Random House